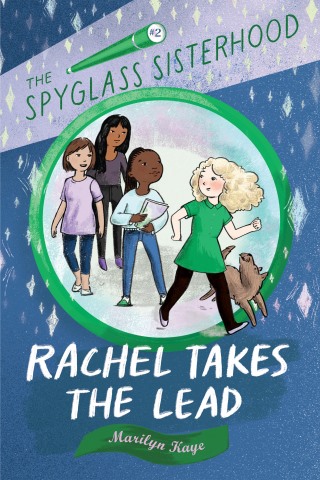 There's nothing four best friends with a magical spyglass can't handle...well, except maybe a lost dog, a school election, and overprotective parents.

Book Two of the Spyglass Sisterhood finds Ellie, Rachel, Kiara, and Alyssa back for another adventure. When the spyglass reveals an image of Rachel walking a dog, she knows it's pure fantasy. Her overprotective moms would never let her walk a dog alone, much less own one! To the dismay of her Spyglass Sisters, Rachel would rather avoid the whole thing all together. However, she can't avoid it for long when a lost dog follows her home.

Meanwhile, Kiara has secretly nominated Rachel to run for class president. In order to win, Rachel must find her voice to advocate for the change her classmates deserve--and maybe even the changes at home she deserves.

The New York Times best-selling author behind the Gifted series and the Replica books, Marilyn Kaye delivers a story filled with light magic and heart in this first book in the Spyglass Sisterhood series. Each girl will take a turn at the spyglass, confronting fears and sticking up for her peers.

Marilyn Kaye: Marilyn Kaye is the author of over 100 books for young readers, including the Gifted and Replica series. Born in New Britain, Connecticut, she grew up in Atlanta, Georgia. She earned a master's degree in library science at Emory University and a Doctor of Philosophy degree from the University of Chicago. Kaye also taught children's literature at St. John's University for over twenty years. She lives in Paris, France.